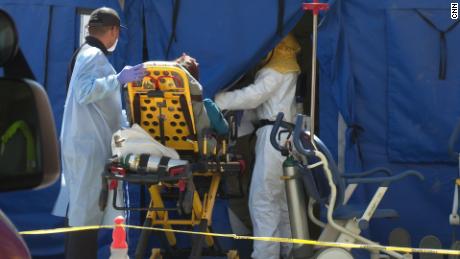 It's loud inside the large blue tent at El Centro Regional Medical Center. Cooled air is blasting through two giant vents to counter the summer heat. Nurses half yell instructions in English and Spanish through their N95 masks and face shields to be heard by patients and each other.The tents fill half the parking lot at the hospital — the most visible sign of the uncontrolled spread of Covid-19 in Imperial County in the far southeast of California, bordering Arizona and Mexico. The death rate here is the highest in the state.Hospital CEO Adolphe Edward watches as people suspected of having coronavirus are assessed outside his 161-bed hospital, where he says nearly 90% of patients have tested positive for Covid.

Edward last saw these medical tents deployed in the Iraq War, during his 22-year service in the Air Force. He didn't imagine erecting them on US soil but turned to them as coronavirus forced him to burst beyond the walls of his hospital.

"We're not used to seeing tents outside of hospitals," says Edward. "When folks say it's a war zone, well, a war zone of what? A war zone of us trying to combat Covid-19."

Hot, exhausting work to save lives

The front line in the Covid war in Imperial County begins with the first responders.At 11 a.m., as temperatures climbed to 110 degrees Fahrenheit, an emergency call sent El Centro Fire Department Captain Chad Whitlock to the front lawn of a home. Whitlock zipped up his bright yellow Tyvek suit, equipped with what looks like a scuba mask attached to an air pump. It's called a powered air purifying respirator, or PAPR, pushing clean filtered air into Whitlock's suit.

Whitlock approached a man, suspected of having Covid, passed out underneath a tree. He manages to revive him and an ambulance with a gurney arrives to take him away. "Emotionally, mentally, it's starting to really wear down on a lot of us," says Whitlock, his hair wet and his clothes completely drenched through with his sweat as he peels off the Tyvek suit. "I wish people would really take Covid seriously for all the health care workers, firefighters, EMS crews, our hospital staff. We're inundated. Everybody's really tired. … I've been here a long time with this department — 29 plus years. This is the worst I've seen it." Whitlock heads back to the fire station where he'll begin a two hour process of decontamination — showering, putting on new clothes and wiping down all his gear. When he's done, he'll start the process all over again, putting the suit back on for the next medical distress call, which the fire department says this summer has been every 30 to 60 minutes in this town of 44,000 people.The patient Whitlock revived is heading to El Centro Regional Medical Center."We feel like we're overwhelmed with so many patients," says El Centro Regional nurse Stephen Jaime. "They're just so sick."

Eleven of the 12 Covid patients in this wing of the ICU are on ventilators and the medics are doing what they can to keep the 12th breathing on his own. More critically ill patients are in an 8-bed unit newly equipped as another Covid ICU. Nurses like Jaime move back and forth between the sealed rooms, putting on similar PAPR equipment to that worn by Whitlock on the emergency call.

Why it's so bad in Imperial County

Imperial County has seen far more coronavirus infections, hospitalizations and deaths than its size warrants. Data from Johns Hopkins University shows the county has three times the number of infections per capita than Los Angeles. And its Covid death rate is nearly twice that of any other California county. The striking numbers do not surprise some who know this rural, majority Latino community. The virus is merely exposing the underlying problems, says Luis Olmedo of Comité Cívico del Valle, a grassroots justice organization in the Imperial Valley. "We are the poster [child] of those inequities and the reason why we're not able to control Covid."One in four people in El Centro live below the poverty line, and unemployment rates have steadily been way above the rest of the country, according to El Centro Mayor Efrain Silva.

"Imperial County, even under the best circumstances, has always had close to the highest unemployment rate in the nation," Silva said. Pre-Covid, the unemployment rate was around 18%, compared to 4 percent nationwide. "And right now we're hovering around 30% unemployment," Silva said.Pollution has also been an issue for generations, with the American Lung Association saying El Centro is among the worst metropolitan areas in the country. That has contributed to abnormally high rates of asthma and respiratory illness, says Larry Lewis, CEO at Imperial County's other community hospital, Pioneers Memorial Healthcare District. Also prevalent in the county, says Lewis, is diabetes and obesity, all of which make coronavirus more severe. "When you hear about those who are more seriously impacted by the disease, ask a few follow up questions about their comorbidities," Lewis said. "You'll hear a constant theme that there are other things going on."

Harvesting in a pandemic

It's impossible to separate what's happening in Imperial County from the situation on the other side of the border. Just south is Mexicali, an industrial city and capital of the Mexican state of Baja California, mainly known for its assembly plants. The same pandemic that's hitting the US is in Mexico, which now has the fifth highest number of deaths in the world.And none of that has stopped the daily interaction between the border communities. More than 275,000 American citizens, including 30,000 military veterans, and thousands more green card holders live in Mexicali, according to Edward. And many choose his El Centro Regional Medical Center for care, he said. And many Mexicans come to work in Imperial County.Every morning, as he has done for 45 years, Jacinto Moreno leaves his multigenerational home in Mexicali and walks through the Calexico border tunnel, legally. By 5:30 a.m., he's starting his day at Duncan Family Farms. Moreno, 65, tends to the all-organic fields that grow cilantro, romaine hearts, gold beets and swiss chard that not only fill the bins and shelves of grocery stores across the US and Canada, but also cross the Atlantic and end up in the kitchens of consumers in the UK.

He is one of at least 20,000 laborers who make the cross-border trek to make a living each day, chasing jobs that change with the season. They work even in a pandemic, though before Covid, that number was more like 50,000, according to El Centro cRead More – Source

A Denver fire that killed two children and three adults was...